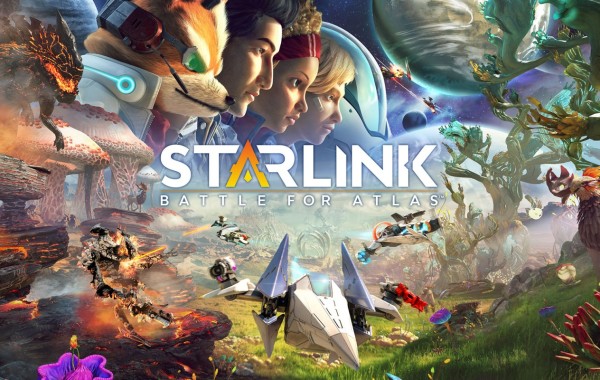 Impressions of StarLink: Battle For Atlas

I really don’t know what to say about StarLink Even as I write this, I am trying to wrap my head around what it is that I am playing and whether or not I can actually give a full account of the game. It is fun…that much I know for certain. But, is it everything that we were promised? Look…I […]

Playing a video game can sometimes be the most selfish thing that someone can do with their time. I know, from personal experience, that shutting yourself in a dark room, with plenty of drinks and snacks, on a cold rainy day, could be one of the best video game sessions of your life. Spending long hours in front of a […]

Question Of The Month: October 2018, A Game Fit For The Holidays

A recent submission by Chris over at Over Thinking Y had me thinking about some video games that can put us in the Halloween spirit. Go and check out his submission to the Question of the Month (created by the talented Kim at Later Levels). Megan over at A Geeky Gal posses a question for anyone to answer. These types of events are pretty fun to get involved in and they really get the creative juices flowing. Thank you to Chris, Kim, and Megan for giving me a reason to write! When October comes around, I usually stick with the basics: I thank God that it is no longer hot outside. I start running outside a lot more. I begin […]

My Thoughts On The New Direction For Assassin’s Creed

I have been a fan of Assassin’s Creed ever since the first commercial came out in 2007. I was entranced by the visuals of the game, and the idea that I would be reliving actual events in history through the lense of a hidden manipulator made it all the more sweeter. I bought the first Assassin’s Creed on the first day and I ended up pouring hours and hours of my down time into it. I remember it being one of those games that I just had to 100%. I ran around and assassinated every Templar, I synchronize at every overwatch point, and I even replayed every mission as an assassin that was never seen. The first game was revolutionary […]

Nintendo Planning On Releasing A New Switch by 2019

As reported by Takashi Mochizuki of The Wall Street Journal Japan, Nintendo is currently planning on releasing a new version of the Nintedo Switch by as early as Summer 2019. The reason for the sudden console upgrade comes down to money…and how much they love it. Sources from Nintendo told Mochizuki that they want to continue to see their revenue from consoles to stay where they are at, and therefore release another console for millions of us to buy. So far, not a whole lot is being push out other then the basics. They want to have upgraded hardware and software, as well as an upgrade display from the original “low-end” LCD screen. Personally, this pisses me off. It is […]

Is Streaming The New Direction In Video Games?

A recent article posted through IGN by Colin Stevens, outlined a new innovation in streaming technology. Google, along with Ubisoft, have partnered in order to push out the next Assassin’s Creed game via a streaming service through Google Chrome. The service is being called “Google’s Project Stream” and it is suppose to have the technological wizardry to allow someone to play a giant game like Assassins Creed: Odyssey over the internet. The requirement are simple: You must be 17 years or older You must have a computer with access to the internet Your internet must be able to reach speeds of 25MBs per second…not that hard, which seems even more impressive that they can have the game run at such […]

This is a post in response to Kim at Later Levels who recently created a post in regards to her pet peeves in games. As fans of the gaming industry and all of the art that is created, I think it is important that we are open and honest about the way that games are created and consumed. We want […]

Impressions of Destiny 2: The Forsaken King

It has a ton of what I loved about Destiny, but also the same of what I couldn’t stand. Over the weekend, while I was still refusing to play anymore of Shadow of The Tomb Raider, I decided that I was going to go ahead and download the new expansion for Destiny 2. Now I have played every DLC and expansion since the launch of the first Destiny, but something changed with the release of Destiny 2 and the subsequent expansions that would follow. Though I was happy that they actually had something of a story in Destiny 2, I felt like the content just wasn’t there. I never had much of a desire to play PVP and the raid […]

A Video Game Sequel That Disappointed Me

I was scrolling through the various articles on my feed and I came across an article written by Cary at Recollections of Play, (check it out if you want a good read!) and I just had this immediate gut reaction to a game that I am currently powering through which fits this perfectly. You may not have wanted someone to answer this question, maybe you meant it as a hypothetical, but I just had to respond. I don’t normally do these type of things, but I feel like the community I’m apart of, *whether you like it or not*, shouldn’t mind if I answer some of your unintended questions. So thanks Cary for giving me reasons to write today. Currently […]

My Hope For Animal Crossing

The most recent Nintendo Direct offered us a glimpse as to the direction Nintendo is going in for the next few months. A ton of information was thrown at us during the 30ish minute video, and a lot of it should have made you pretty excited. However, one announcement in particular got me more excited then the rest…Animal Crossing for the Switch! *duh…of course this was going to happen. Nintendo is very predictable and you can bet that they would make another game in a successful franchise. I’m going to go out on a limb and say that they will also make a new Paper Mario, Pikman, Legend of Zelda, Mario and Luigi RPG…you get the point. Animal Crossing has […]

This post should be pretty short depending on whether I can speak my peace in a coherent fashion or ramble for awhile about my likes and dislikes…of which there are many. Like many choices in my life, I like to weigh the pros and cons. This can help me gain perspective as too which choice can grant me the better outcome, or if either choice will lead me down a particular river with no means of traversal…(up shit creek without a paddle). Even though the service has been out for only a day, I still feel confident that I can have a genuine opinion, and that’s not a good thing. Here is my break down… Pros Obviously, the fact that […]

Something Is On My Mind: What’s With All Of The 16bit Games?

There are some topics that flow around my head while I am at work, and sometimes I just need to get them out. Disclaimer: I don’t actually write while I’m at work. I let the idea stew for awhile, and then post them when its convenient for me. I grew up in the 90s and I have an appreciation for older games. My first system was a NES, though I don’t have too many memories of playing it, I do know that my chubby little hands first learned button placement from a NES. The first system that I know I abused the heck out of was my SNES and I will always remember the ridiculous amount of time that I […]

What more can be said about this game that isn’t already being said? Being a fan of Spider-Man ever since I was five and allowed to have money, every source of media entertainment that has Spider-Man in the title usually takes my money. I have seen all of the movies, played all the games, and read just about any comic that I could get my hands on. So, when I say that this is by far, the best Spider-Man game that I have ever played and seen, that should say something. Story One of the best things that this game tackles is the complex and often heavy story. So much of the Spider-Man lore is driven around the tough choices […]

Last week I shared my first saga with Octopath Traveler and my impressions on how the game feels to me. If you want, check it out here. Work has been a slog, and working long hours has made it difficult to actually put in some quality video game time. My routine has been something to the tune of mass confusion and panic, with just a hint of getting things done. If I can work out for an hour a day, I’m doing pretty good. That being said, I can say that I have gotten to a place in Octopath where I don’t have to invest a whole lot of time to get some enjoyment out of it. Steady Grind As […]

I recently picked up my copy of Octopath Traveler, mainly because of the mass shortages of physical copies that every store was facing, but also because I needed something for a long road trip that me and my brother were about to take part in. Little bit of back story: My grandmother recently had a stroke and though she is recovering well and doing much better, my family decided that it was time to move her out to Mississippi with us. She has lived most of her life in Sylmar California and has always been reluctant to make the move, but after this incident, she finally came around and agreed that it would be best to be around family. We […]

I should probably start of by saying that I have never played a Ys game before this one. Many of the podcasts that I listen too made mention of this port and usually had pretty amazing things to say about the series as a whole. Since the summer months are pretty slow when it comes to new releases, I decided that now might be the perfect time to pick this up and give it a try. Like many, I usually stick with what I know and what I enjoy. I will be the first one in line for a new Kingdom Hearts, but will usually let the dust settle for an off the wall series before I spend my money […]