This is a post in response to Kim at Later Levels who recently created a post in regards to her pet peeves in games. As fans of the gaming industry and all of the art that is created, I think it is important that we are open and honest about the way that games are created and consumed. We want […]

This is a post in response to Kim at Later Levels who recently created a post in regards to her pet peeves in games. As fans of the gaming industry and all of the art that is created, I think it is important that we are open and honest about the way that games are created and consumed. We want to praise developers when they make something truly spectacular, and correct them when they make errors.

I wasn’t really in the mood for a rant, but I rarely pass up a good opportunity. So thank you Kim!

As I previously mentioned, someone that is a true fan of something cannot just sit back and not voice their criticisms when you see something that goes against the progress of what you hold dear. It’s the reason why their are so many reviewers for just about everything. We all care about something, even if it’s something as simple as a character created by a bunch of 1s and 0s.

I’ve been playing games ever since I could hold a controller in my hands and understand the functions of an A and B button. I have seen the best and worst, in my opinion, in gaming and I often find a few things that really take me out of the experience. Some of these might be knit picky, but I don’t feel as though I am alone in some of these criticisms.

#7: Areas That You Should Be Able To Climb Over, But Can’t

I promise that my others on the list will not be as knit picky, but I feel like this issue needs to be addressed none the less, and no other series does this better then Uncharted.

It is so annoying when you play a game that is designed around the main character’s athletic abilities, yet he/she cannot climb up a simple cardboard box or desk…I’m looking at you Lara Croft. Don’t think for a second that I forgot about you.

How is it that Nathan Drake can perform some insane climbs up the side of an incredibly large mountain, yet fall victim to a tree next to the window of the building that I need to go into? I get that the designers have created a path for you to go down because it helps drive their story, but it just doesn’t feel right when they put up some stupid barriers.

#6: Expansions rather then season passes

Now, I’m really not a fan of either option if I’m being honest. I feel like games are being created for the soul purpose of making more and more money over time, rather then giving us a completed product. Earlier this year I did some digging and found out just how much various game developers make and how they are not hurting for cash….I’m still waiting for my Pulitzer.

Recently, I was in the mood to play Destiny 2 because of the new story, but I forgot that even though I bought the season pass, it didnt cover the third expansion and I would have to shell out $40 in order to continue the story. So far, Bungie has taken roughly $140 for pretty much the same game, just different enemies and weapons. I know that an MMO of this scale is different from a typical story driven narrative, but we all know that they are making plenty of money when it comes to their microtransactions. Everyone wants a chance at a different colored ship or cool dance move.

I really wish that it if we are expecting a new story or some additions to an existing game, they should be up front and honest as to the cost and the content. We should have to pay once for the game and once for for the added content, if we so choose.

Not to get on another soap box, but Destiny is another interesting case. This game is really designed around the idea that you have to continue to pour more and more money into it if you want to have a good time and get everything out of it. Most DLC’s are predicated around the idea that you could get the full enjoyment and fulfillment out of a base game, but if you want some additional content that might further the story, then go ahead and pay a little extra. However, Destiny 2 is virtually unplayable if you do not have the expansions because of the additional content.

Platforming has been a staple in video games since the idea of moving an object from one side of the screen to the other. Mario is the obvious perfect model of this genre, but why is it that games made today have not been able to replicate or even get close, sometimes, to what we all know as a competent jumping machanic?

There is nothing I hate more than a platforming game that has terrible camera angles and even worse jump distances. Whenever I run up to a ledge, thinking that I could easily make it, but instead fall to my death because I didnt start my jump inches before the ledge. It would seem to me that they could either have the jump at a closer distance, or just not have the jump at all. Why make a jump difficult if it is not even necessary to the story?

Games like Wolfenstein and Doom where you can argue that the main focus of these games are the combat and or story, and less about the difficulty, but the majority of the conversation becomes how difficult this game is. I will say that I stopped playing Wolfenstein 2 because I was sick and tired of dying over and over on the same fight and I refused to lower the difficulty to baby. I felt like that difficulty was too easy and almost like a slap to the face. There should have been some type of middle ground.

Ok, now I will talk about Dark Souls. However, Dark Souls isn’t the only culprit. Recently, it seems like games that do not have a tutorial, are becoming edgy and cool. It’s almost like not knowing anything is now cooler then knowing…and I say not…knowledge is power!

When you start playing Dark Souls, or Nioh, or No Man Sky, or Sea of Theives, one of the major things you realize is that you know nothing. You have to run around and try to figure out how to play the game instead of just playing the game. I hate it when I have to look up various articles or watch a video on how to do something that the game should have just told you about. I had no idea how to heal in Sea of Theives and was visibly upset when someone had to tell me that I had to switch to a banana and eat it heal. WHY!? WHY A BANANA!? WHY WOULDNT THEY TELL YOU THAT! *throws the controller and gets a drink*

I would argue that video games are a more important media then movies. You spend much more time with a game then you would with a 2 hour movie. Games made today can expect to take just as long, if not longer then it would take to make a movie, and sometimes might even involve more money. With that, I will never understand why game developers cannot invest more money on better voice actors/actresses.

In high budget games like Shadow of the Tomb Raider, there is no reason why you cannot not afford to put in some better voice overs or even better animations. Nothing pulls me out of a story faster then dead, expressionless faces on a character model after something important happens. No one is a bigger offender of this then Mass Effect, but I’m not done picking at Tomb Raider. They know what they did.

I’m tired of looking at my thesaurus.

I have written a good number of articles detailing my disdain for bugs and glitches in games, so I guess I will attempt to summarize.

When you are trying to make a game, why not take the extra time it needs to make sure that the product is complete? I’m so sick and tired of developers being lazy and promising to patch a game after it comes out. There will never be a car dealer that will sell you a broken car, at full price, and promise to fix some issues every few months so long as people continue to drive that car. It’s possible that a game never gets patched completely and it remains broken, even though a lot of people paid full price for said game. Mass Effect: Andromeda is the perfect example of this. This game was so busted and broken from the launch that many players were up in arms and furious. I was one of them. I hated what they did to this beloved series and I begrudgingly played through every broken moment of that game, only to find out after beating it that they are rolling out a 5GB download that is suppose to fix a ton of issues with the game. Out of principle I never played it again and I never tried to see what they “fixed”. Regardless of how they try and spin it, what they gave me day one was their final product. It was the product that many committee members decided was good enough to push through and say to the world, “This is Mass Effect and we are proud!” 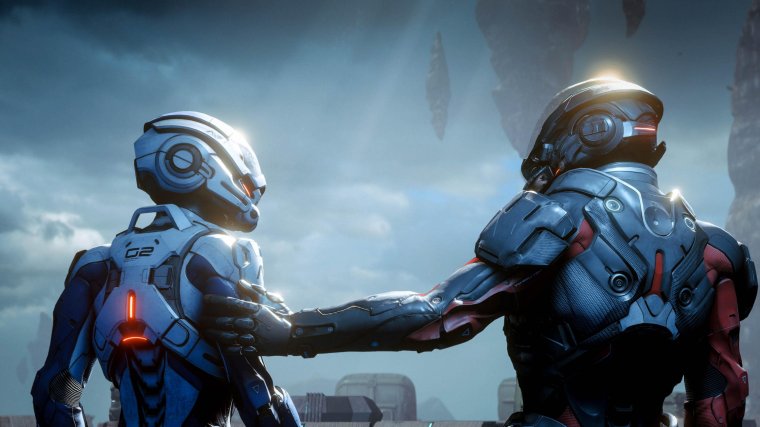 I don’t agree with the idea that games evolve over time, and therefore should be revisited when they fully patch a game. When you put something out, it better be the best that you can do. We shouldn’t be ok with companies asking for 100% of our money, and then give us 60% of a game, with the promise of maybe one day making it 100%. Andromeda had to be cancelled and the series is now frozen until the dust is settled and the anger has subsided. However, people like me that spent over $100 on this game because of the season pass and the expectation that this would be a great investment, are now out of luck and have to just be ok with that fact.

So these are some of the issues that I have with games. I want to thank Kim again for giving me a reason to write and get some of these frustrations out. Its pretty therapeutic to vent every once and awhile and even better writing it all down. You should try it!