I really want to like this game. In theory, it should be something that grabbed me and that would have forced me to bug my friends into submission, but I just can’t get through it. I have been trying to get my friends to check this game out, but I could tell that it was going to take some convincing. How can I expect them to pay $60 for a game that I wasn’t even too sure about? Apparently, I’m pretty good at negotiations and was able to get my friends to try it out. (That and anyone can get a 14 day free trail to Xbox Game Pass, which allows you to play Sea of Thieves for free).

Over the weekend, my friends and I attempted to play this game to its fullest and actually gave it a real shot. To much of my surprise, the game loaded us in fairly smoothly and it didn’t take long before we made our way to the ship. 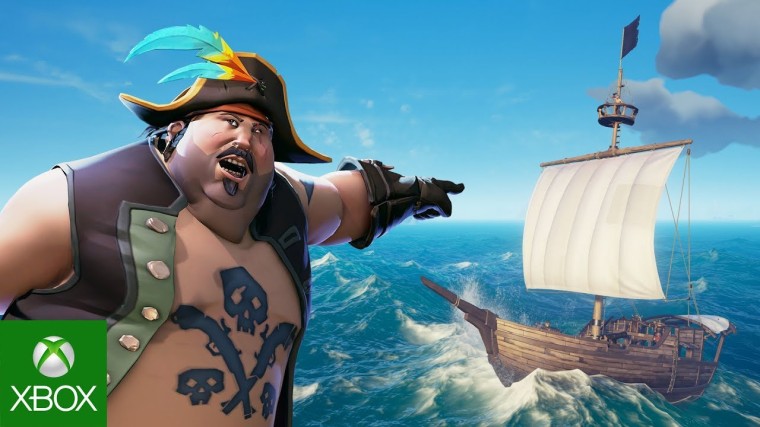 Managing the ship with people that weren’t afraid to speak up made the trip pretty enjoyable. We hit our stride after traveling to our second island during our very important quest involving catching chickens. We traveled to a couple of islands and continued to come up empty handed. We gave up hope, until I notice an island literally named “Chicken Isle”.

We plotted a course, played some music, and eventually landed on the small island of chickens. After some funny moments of chasing chickens (FYI best title you can get in Fable) we eventually turned in our quest and collected our money.

During our play through, we also found ourselves in a naval battle with one unsuspecting person. He was all alone, in his tiny ship, and we knew he was easy pickings. We let loose the sails, angled the masts for maximum speed, and in no time flat, we were exchanging cannon fire. His ship was small and easier to maneuver, but ours was faster and we had more people to man the cannons. He led us on a chase that eventually brought us to an outpost. We were so pumped with trying to sink his ship that our driver ran us right into the island. We had far to much damage to repair and eventually lost our ship to irony and stupidity.

After playing the game with some friends, I can see how this can be fun. Where it lacks in any story what so ever, it makes up for some brilliant visuals and a pretty realistic naval experience. I’m still not sold on the game as a whole, but I can see how some people might find this enjoyable enough to play for a couple of hours each day. However, I don’t see where this game can go from here. Obviously, they would need to do something in way of a story line and make the progression something more meaningful then extra skins for your items or new sails.

So how has your experience been with Sea of Thieves? Let me know and let’s see if I’m just to hard on it.

If you want to check out my first day impression then you can read it right here! Thanks for reading!