Recently, another mass shooting plagued the United States, and this time it was directed at a high school in Florida. Many students, who were feeling as though they were as safe as they could be, ended up in the middle of a situation that very few have ever and will ever experience. Students were killed and many more injured […]

Recently, another mass shooting plagued the United States, and this time it was directed at a high school in Florida. Many students, who were feeling as though they were as safe as they could be, ended up in the middle of a situation that very few have ever and will ever experience. Students were killed and many more injured by a former student with an AR-15 style assault rifle. The gunman pulled a fire alarm in the school and then waited patiently outside as students began to perform their fire drill procedures. It was at this time that the psychopath opened fire on his former classmates and began the horror show that we all have been re-watching over and over these past few days. The gunman later tried to blend in with the panic and attempted his escape. Police were able to find him just a few cities away and he was later captured and set to the hospital for injuries he sustained during his escape.

This whole situation is heart breaking and my heart goes out to the students who may not ever get over such a horrific event. However, because we live in such a political society, many feel as though (and I am included in this) that nothing will change and the next mass shooting is inevitable.

The story is always the same even if the catalyst is different. Politicians will go on TV and cry to the cameras as if they are just as shocked as the rest of us that this is continuing to happen in America, TV personalities, news anchors, and celebrities will all call for reform to our horrific gun laws, our congress and house of representatives will have a moment of silence and prayer, people will begin pointing figures at everything except for guns, and over time, people will forget this event even happened until the next batch of students or concert goers lose their lives. 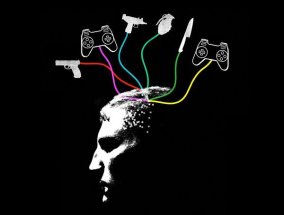 Seeing as this a blog that I created for the purpose of sharing my thoughts on everything concerning video games, I will not take a deep dive into my believes into this issue. All I will say is that the idea that it was so easy for the gunman to buy an AR-15 (modeled after the same type of weapon that I would occasionally use in the military) is absolutely ridiculous. These types of weapons are designed to be effecting killing tools and are renowned for their ability to fire multiple rounds, with accuracy, at great distances. I personally own guns. I have in my possession four handguns. One is for my job, one I bought when I was a repossession agent and needed a concealed option for when things go sideways, one is for my wife, and the other was a wedding present from my father that I learned to shoot when I was 6. I understand the unfortunate need for a firearm in this new culture of ours, however, I have never figured out what the need to own an AR-15 is. I have friends that have multiple AR-15s and they have never been able to give a better excuse for owning them then, “I think they look cool.” If you need on to hunt with, then you are a terrible hunter and if you need one for home defense, then buy a shotgun. I understand using it for target practice because they can be fun to shoot, but any other reason is just bull shit.

My feeling is that this can all be avoided if we discontinue the manufacturing and sale of AR-15 style assault rifles. They serve little to no purpose other than someone telling their friends, “hey want to see my AR?”

However, this once again is a gaming blog. I am going to step down off of my soap box and get to what I wanted to discuss.

As I was packing for my trip to North Carolina for a wedding, I was watching the aftermath of the events unfold on the news. I listened to the worried parents accounts of the events as they patiently waited at the recovery zone to see if their child was ok. Many of them called out politicians for allowing this to happen and doing nothing to stop it. Many politicians began pointing fingers at the law enforcement community in order to stop their declining poll numbers, but there was one politician that made my ears perk up. This was a representative from Kentucky and he wanted to go ahead and lay the blame down at the feet of violent video games. His point was that we have become so numb to violence through video games that we no longer care about human life. He said that back in his day, he would drive to school after Christmas and show off his new shotgun to his friends and no one ever thought about shooting up the school. He even alluded that many students would have their rifles and shotguns in the back of their trucks and often times the doors would be unlocked. It was just different times back then I reckin.

We have all heard this point before. This is not the first time that people have tried to use video games as the ultimate evil that is effecting our children’s hearts. Back when Grand Theft Auto 4 was released, a couple of politicians came on news outlets and denounced such violence proclaiming that these games will ruin children for generations and people will be beating up hookers and robbing liquor stores in droves. It’s the usual suspect because video game developers do not give money to politicians…the NRA (National Rife Association) does. Why bite the hand that feeds you?

This event is still fresh and I am sure that various outlets are attempting to rehash some old and outdated statistics, and later on in the coming weeks, we will hear a new batch of studies that show that violent video games are the cause and not the military weapons that children to young to buy beer can obtain legally.

The study they won’t show is research done by Whitney Decamp at Western Michigan University in which she shows that the effects that violent video games have on our youth is minimal at best.

(Violence in Video Games) This is the research paper that she submitted.

In the study, Whitney issues surveys to an entire 8th grade population in her town and received over 6,000 back. Out of the surveys received, she concluded that more than 70% of males admitted to playing M rated video games and only 20% of females could say the same.

After collecting a sample size of the large group, she conducted a series of experiments in order to see what effects gaming would have on violent behavior.

She asked if the male students would be more likely to hit someone out of rage or anger and less than a percent showed that they would. Their was a similar statistic for women as well (however, it was a bit higher, about .1 percent higher.)

Next she wanted to see if the students would be willing to bring a weapon other than a gun on campus. The results showed that the number of students that said yes were extremely low. Roughly (.002) said that they would actually bring a gun to school. The statistic for someone bringing a gun on campus in this study was virtually zero.

So what does this tell us? In my opinion, passing the blame from one side to the other will never solve the problem that we are facing right now. The idea that a politician would rather shift blame, instead of fighting the real issue, is appalling. This is not a video game issue. This is not a bullying issue. This is not even a mental health issue. This is an issue that stems from an unwillingness to address the gun issue that we have had in our country for far too long. The simple idea that an 18-year-old person, someone who has not even had enough time to fully form their brain, was able to buy a military style killing machine legally. It was easier for this child to buy a rife then it was for him to buy a beer or buy a car. How dare people try to blame video games?

Get out and Vote in 2018. Let these people know that their lack of moral integrity and their willingness to support their donors over the people has consequences.