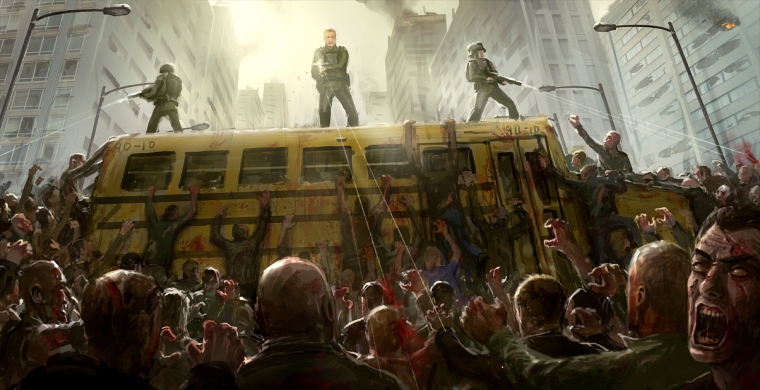 You are in your bed, sound asleep, recharging your batteries for the next day. You wake up feeling remarkably refreshed, perhaps thinking that the new workout you did the night before caused you to sleep harder than you ever have. You reach over for your phone and check to see if you have any messages, when you notice that it will not turn on. A slight panic washes over you. Did I forget to plug in my phone again? How many calls have I missed? What time is it?

Because of cell phones, most people will forget that they actually had to tell time by looking at something called a clock.

Now fully awake, you throw the blankets off and make your way to the nearest clock when you notice something that raises your stress levels; the sun is high in the sky. You have slept in and you are going to be extremely late for work.

Now, in a full adrenaline fueled panic, you begin grabbing anything that resembles clothing and start making your way to a clock. You just want to know that it’s not as bad as it seems. As you leave your bedroom, you being to feel uneasy and notice somethings are just off. The fan you always have on is no longer running, you don’t smell pre-made coffee that you set up the night before, and the screen on the microwave is completely blank. The power is out, you overslept, your phone is dead, and you know that you are screwed.

You throw on your cloths, grab your useless phone and the charger, your keys, and make a run for your car.

The moment you hit your door, you feel and hear the movement of tons of people. You open the door to see families taking in paniced tones and dragging their children for the steps leading to the lower levels of your appartment complex.

Strange. But, you are late. Screw them.

You brush past them and make a mad dash for your car. You feel the mid morning sun on your face and you start tapping into the abilities of your ansesters in order to make out what time it could be based on the suns possition in the sky. Anything to make yourself feel better I guess. You jump in your car, turn the key, and notice your fears have become real. You are three hours late for your shift.

You slam your car in reverse, pull a maneuver that you have seen in movies (pretty sucessfully to your amazement), and make your way to the entrance when you notice you’re not going anywhere any time soon. Traffic is backed up and you are completely blocked.

While creating new curse words that would make George Carlin flintch, you turn on the radio and hope that someone has a pretty good reason for why you are stuck. The only thing coming through the raido is low to high pitched tones. After a few seconds, a recorded message is played through the emerengy broadcast system

“This is not a test. I repeat, this is not a test. By order of the Governor and in cooperation with the United States Armed Forces, all residents are to return to their homes or seek shelter. Do not come into contact with anyone that you do not know. Do not open your doors unless you have been directed to by security or state representation. If you notice someone being overly aggressive, do not engage the individual and instead contact your local law enforcement.”

So this is the situation

You have woken up to a zombie outbreak. But, you have no clue that this is a zombie situation. All you know is that you are late for work, your apartment does not have electricity, your phone is dead, and you are blocked in by traffic all around.

I have done a little research on the topic and I can give you some clues as to the state of the world if a zombie outbreak were to be unleased and they are starting to overwhelm us.

Because water is pumped while under pressure into water towers via electricity, you should be able to get water for at least several days. Since we are in a city however, the pressure will be greatly reduced and the horders will put a strain on the sytem. I would say that for this situation, you have running water for four days.

Smaller cities and towns will have running water a few days longer, but fires that break out might put a damper on water reserves.

This is tricky since natural gas might lead to issues involving fires and explosions. You can expect these systems to be operatioal for a maxium of a week, depending on the issues associated with it.

Because of such a high demand, these could easily be gone in a matter of a week. Though they don’t necessarily need electricity to pump, gas will be the back bone for everyone wanting to escape the nightmare and will become very important. For this situation, your apartement complex is located next to a gas station.

If you don’t want to be loney during your survival, you will need to think about your friends and family.

In this situation, your parents live roughly three miles from where you are now. They are in a heavily populated subdivision located just a mile and a half from a hospital and a grocery store.

Your brother and his wife live further away. Roughly fifteen miles from you and they also live in a highly populated subdivision. Your brother has access to an SUV and a very spacious, extended cab, pick up truck.

Your closest friend lives three doors down from your parents and has martial arts experience as well as police experience. Recruiting him would be invaluable, however he lives with family memebers that have medical issues and will need to come with you. Lets say the medical issues are diabetes and lower back issues that make walking a challenge.

In geographical terms, you are in a normal city that is outlined by a larger city to the west and a smaller city located to your east. The larger city is roughly seven miles on the highway and the smaller city is about ten miles on the highway. Your apartment complex is one street away from the major highway, but due to poor planning, the road is a four lane street with a one lane entrance and exit. You are located roughly a hundred miles from the ocean to your south and more rual farm lands are located to the north roughly fourty miles from where you are.

However, in order to reach the farm lands, you will need to drive through very heavily populated cities.

What you have at your dispossal is everything that you would typically have at this point and time.


Lets make this fun and see how everyone would survive.

Send your answers in the comment section and lets debate the best methods for survival.

I encourage you to share this post in order to see how many people we can get involved. Perhaps we can one day set up a scenario where we elect judges and (for lack of a better term) “Dungen Masters” to lead the story forward and see who would come out on top.