Undead Studios is once again partnering with Microsoft in order to make the long awaited sequel to their cult classic, State of Decay. During the Microsoft press conference this year at E3, Microsoft showed off some of the new gameplay footage and received a lot of praise during their live demos on the showroom floor. People that had a chance […] 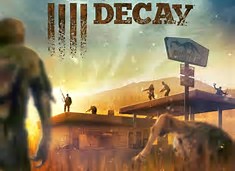 Undead Studios is once again partnering with Microsoft in order to make the long awaited sequel to their cult classic, State of Decay. During the Microsoft press conference this year at E3, Microsoft showed off some of the new gameplay footage and received a lot of praise during their live demos on the showroom floor. People that had a chance to try the game said that it felt like a true sequel in the sense that it was much bigger, had more to do, and felt smoother. Which would be some great news since the first one never gave me a warm and fuzzy. I never felt a great desire to finish it and would often stop playing it for months on end. However, because of the good reactions from fans and first time viewers, I decided to download the game one last time to my Xbox and give it another shot before its return.

State of Decay is an adventure/action/horror game set in the zombie filled apocalyptic world. The game starts out with you in the middle of a zombie attack right from the get go. As you run over to your friend that is being attacked, you receive the basic tutorial messages and start your zombie killing assault. Saving your friend is only the beginning however, because now you must run from the approaching zombies that are far too many to fight on your own. As you run to safety, you are shown that you are not a super human being and will often have to stop and rest, which will cause your heart to race as you see the approaching doom and no longer have the strength to run. These tutorial missions foreshadow what you can expect throughout the rest of this game as you are choosing which battles you can win and which ones you will need to run from.

The game will truly open up once you have made it to your first base of operations and you see what is really in front of you. You choose everything right from the start and will immediately start to feel the changes that your decisions are starting to make in the world around you. You have to choose how you want to strengthen everything around you and what type of activities can be performed. You will have a finite amount of space at your disposal and many different building and upgradable options. Sometimes having to sacrifice a library for a few extra beds might mean that you can have more survivors among your crew, but you will not be able to upgrade certain structures or make some people happy. You will have to balance with this “give and take” system throughout the main campaign and hope that you have made the right decisions. 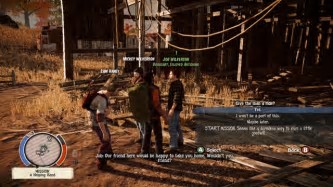 Rather than sticking with the traditional “army of one” type of main character, State of Decay changes things up by making the community that you build the main characters. You have the ability to swap out whom you play as throughout the game and will be able to play as anyone that you save. Each person will bring something new to the table and will have their own strengths and weaknesses. During my first play through, I got attached to the main character that you play as in the beginning of the game. The more that you play with someone, they will receive stat boosts and will start to become more powerful among the rest of your group. My down fall was getting so far in the game that I really didn’t have anyone that could be as good as him. When I got into a hairy situation and my main character became sick, I was extremely underpowered and was unable to complete any missions until either he got better or my other characters got stronger. Though this was the cause of me getting frustrated and not wanting to play the game for a while, I can take a step back and see what they are trying to do. I only have myself to blame for not playing the game the way it was intended. During my most recent play through, I can report that things had gotten a lot easier and I found that playing with the different survivors gives you a better understand of their stories and you will start to form a bond with each and every one of them. Knowing the strengths and weakness of those around me made the missions much more enjoyable.

Strengthening your characters will not be very helpful if you cannot keep your main base and outposts afloat. You will have to play resource management and track down food, water, lumber, medical supplies, and everything else that your compounds will need. Over time, your resources will start to dwindle and your people will being too lose hope in your leadership. They will begin to not trust you, which will stop them from going out with you during missions or supply runs. I never had an issue with collecting resources due to the fact that they are pretty easy to get your hands on. The world is littered with abandoned houses and remote farms that can be searched and pillaged for resources. The zombies will not make this an easy task as they will be on you the moment you walk into a structure. You can attempt to sneak around and try to get in and out without them spotting you, however, you will sometimes make noise when you are trying to open something up and this will in turn alert any zombie in the area to your position. You will need to start filling up your backpack and load up your truck before the numbers become too overwhelming. Though this system will get your heart racing the first couple of times, you find out that you can always come back to the house or structure if it becomes too dangerous and pick up what you left.

The story is pretty bland and underwhelming. If you sit there and think about what this games story is about, you will more than likely be right. I wish I had more to say in regards to the story, however this is not where this game shines.

Where this game shines is the multiplayer. State of Decay was intended to be played with a group of friends (I think, in order to distract you from the lame story). Playing with people makes this game really come alive as you and your friends search houses and fight back the undead.

I finally beat the game just a few days ago and I was honestly ready for it to be over. Though the story was the worst part, I did have fun creating more outposts, trying out new characters, playing around with the different structure options, and doing some old fashion zombie killing. I am sure that you can pick this game up pretty cheap and get your enjoyment out of it before State of Decay 2 is available. I strongly recommend that you find other people to play with you as this will only make it that much more enjoyable.